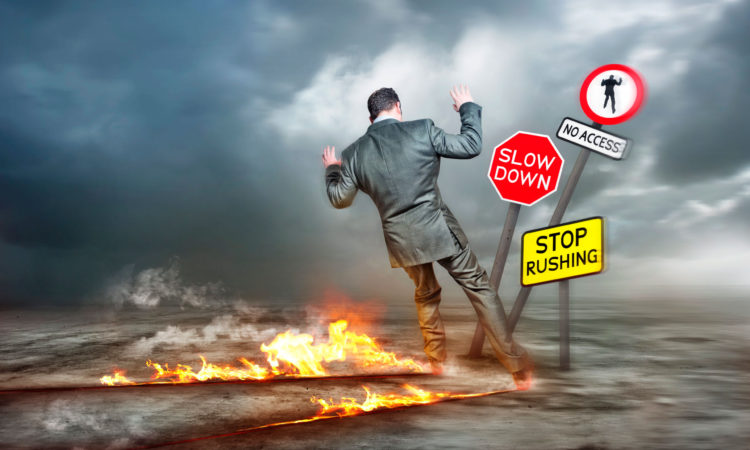 Hiring managers and candidates are used to recruiters asking to speed things up. Speed up your feedback turnaround time, speed up your interview process, speed up your decision time frame. It’s a hot market. Jump on that talent or they’ll be gone. Candidate, where’s that resume already? Can you interview tomorrow???

Don’t get me wrong. Some requests for speed are valid. Taking 2 to 3 weeks to decide to make an offer AFTER the final interview is too long. On the flip side, companies won’t wait weeks for an acceptance or decline. When there is genuine interest and it makes sense, do take action with a sense of urgency.

But, when it comes to evaluating the fit between employer and employee, I highly recommend slowing down a bit to speed up.

This is because, I have seen the consequences in this industry of hiring decisions made too quickly. These consequences surface when it becomes clear to one or both parties, within about 9 to 18 months or so, that what they thought they were getting hasn’t come to fruition.

In one Bridge Group study, average annual attrition in B2B SaaS sales came in at 34%, and more than 1 in 10 companies experienced turnover rates higher than 55%. The study also showed that companies below 25% in annual attrition had 12% more salespeople at quota vs. those with 25% or higher turnover.

Some turnover is necessary, but a strong hiring process can lead to a much lower (and less costly) rate of attrition.

When it’s not a match made in heaven

In sales, success boils down to this; can the producer (or leader) make his or her sales goals?

If no, then Houston, we have a problem, which may result from any of the following:

-The product is not all that was promised. It isn’t as marketable or competitive as it appeared. For loan officers, this may relate to how a lender prices, underwrites, and processes loans. For Fintech, a given product may show early promise without an ability to achieve proof of concept.

-Go-to-market strategy is flawed and cumbersome. Marketing and/or sales support may not offer the support that was promised or is ideal. Execution may be flawed.

-The candidate either inflated past sales performance and competencies and/or the track record was never verified in any reliable way.

-The individual simply doesn’t fit with an organization’s core characteristics or it’s WHY. This is more difficult to pin down. It’s a square peg in a round hole. It may show up in personality conflicts, inability to work effectively with the team, or a general lack of passion and excitement, all of which can lead to an inability to be productive.

If you’re seeing too many of your hires turn out this way, what to do about it?

The devil is in the details

There are several key steps you can take to conduct proper due diligence on the fit, but one recommendation I make to all my clients and candidates; have a long, in-depth conversation about specific deals and customers (or types of customers to protect confidentiality). Deals your company has executed and excelled at; deals you turned away or wouldn’t touch with a ten foot pole; deals the candidate has done in the past at previous employers; deals the candidate hasn’t been able to do at past employers. Deals you would both like to be doing but aren’t and how can you together make that happen? How specifically were/are these sales generated, managed, closed, and executed?

This is the time to really dig in deep.

Because in sales, the devil is often in the details.

So consider slowing down and taking the time to have this kind of in-depth conversation, so both parties can make better decisions with a high level of confidence in the outcome. This will 100% speed up the longer-term path to success, sales, and career growth for everyone involved.

Contact Us About Your Next Search or Your Career!
Book a Call
Copyright FiSource Search Group. [2020] - All Rights Reserved